In his final season, Dirk was cheered by opposing fans. Bobby Karalla tells the story of how this happened.

And the game was played in Boston.

There were several Mavericks fans in the crowd, though no one knows how big or small that group was. No, the Boston Garden is usually an unfriendly arena to its out-of-town guests, which is what made the scene so surreal. When Nowitzki grabbed his head with his hands, he seemingly did so as much out of dissatisfaction as disbelief. He had wanted to play better – he had wanted to win – but he had never been cheered so loudly in that building. In fact, I’m not sure a visiting player had ever been.

»I’ve rooted for an opposing player to score two times in my life: Paul Pierce and Dirk Nowitzki,« Celtics head coach Brad Stevens said. »I was sitting over there just like everyone else in the building saying, ›Go in. Go in.‹«

That night in Boston, when some 20,000 Celtics fans adopted Nowitzki as one of their own for a night, was not the first time NBA fans have collectively shown Dirk their appreciation. But it was the beginning of a two-month stretch in which he made visits to the most famous arenas around the country, home to some of the most rabid fans, and received incredible ovations at each stop along the way.

Nowitzki’s loyalty to the Mavericks and his personal professionalism and class have long endeared him to fans in Dallas, but just recently, within the last few years, have fans around the league begun to openly admire him for those same reasons. It was not always this way; Boston fans booed him for many years before they cheered for him. Nets fans in Brooklyn witnessed him move past Moses Malone and Shaquille O’Neal on the all-time scoring list in consecutive seasons, but he brought them to their feet only when his most significant scoring milestones had already been achieved.

As time has gone on, as Nowitzki has continued to add to his list of accomplishments and become one of the players most well-respected by his peers in the league, fans have grown unafraid to cheer for him. Admittedly, it must not always be fun to root for an opposing team’s player, especially one who spent so many years scoring 25 points and defeating your favorite club.  But at some point along the way – perhaps when cracking the top-10 in scoring, or reaching 30,000 points, or becoming the first player ever to play 21 seasons for one team – a player transcends the role of opponent and becomes someone even opposing head coaches cheer for.

»In an era when players will change teams to give themselves a better chance to win or make more money, Nowitzki has remained in Dallas, establishing the new standard for a player-team union.«

Nowitzki has long represented the qualities we admire most in great athletes; he’s extraordinarily talented, he’s got a great sense of humor, and he has signature abilities that no one else his size – except, funnily enough, perhaps his new teammate Kristaps Porzingis – can replicate. But Dirk’s other side, a combination of his loyalty to the Mavericks organization and his eagerness to make a difference in Dallas, his »second« home after moving from Germany, earned him national respect almost as much for the fact that it was kept private as for the work he was actually doing. His annual celebrity baseball game and tennis tournaments force world-class athletes outside of their comfort zone and into hilarious situations. His traditionally private holiday visit to a local children’s hospital was finally chronicled, with Nowitzki’s agreement, in The Dallas Morning News. The story immediately went viral.

And in an era when players will change teams to give themselves a better chance to win or make more money, Nowitzki has remained in Dallas, establishing the new standard for a player-team union. He has spent 21 seasons with the Mavericks, surpassing Kobe Bryant’s recent record of 20 years. It is a record that will possibly never be touched, especially if he returns for a 22nd season. For reference, the Grizzlies’ Mike Conley is the league’s second longest-tenured player with one team. He would need to play in Memphis through the 2027-28 season to match Nowitzki’s 21 seasons.

Dirk has become so synonymous with the Mavericks that it is impossible to separate one from the other. He’s appeared in nearly half the franchise’s games all-time. Dallas was competitive for an enormous portion of Nowitzki’s career, as well, with him leading the way every single one of those seasons.

»When fans stand and cheer for Nowitzki, they are standing and applauding a player who reached the peak of athletic performance while maintaining the grace and humility of an everyday person.«

Nowitzki’s rare combination of elite production and exceptional loyalty has resulted in one of the most extended displays of fan appreciation the NBA has ever seen. Before the Boston crowd roared his name, Charlotte fans showered him with cheers while he sat on the bench in the fourth quarter of a game the Mavericks won by 38 points. Indiana fans treated him with the same respect later that January. Garden fans were treated to a performance worthy of the arena’s mystique when Nowitzki scored 14 points in just 12 minutes in a 24-point Mavs win.

Then came the team’s late-February trip to Los Angeles to take on the Clippers, when, in the final seconds of what had been a closely contested game, Doc Rivers called a timeout, grabbed the microphone from the public address announcer, and implored his team’s fans to stand and cheer for »one of the greatest players of all-time.« It was one of the most stunning displays of respect in league history. Mavericks TV analyst Derek Harper, who himself enjoyed a long and successful career and played against some of the all-time greats including Magic Johnson, Larry Bird, and Michael Jordan, was speechless; he’d never seen anything like it before.

The great irony in all of this, of course, is that Nowitzki has never been one to seek attention in any regard. His visits to hospitals and with other children and families his foundation connects with have been kept private for so long for just that reason. Dirk describes himself as a regular person who’s very good at putting a ball into a basket, and as such the life of a celebrity does not appeal to him. However, the rise of social media now means that just one single video of him working in the community, or giving one inspirational quote, or of him raising money for children and families at his tennis tournament, can be shared and viewed instantly by hundreds of thousands of people. But his basketball influence reaches people far and wide through the internet. This season, fans who have spent two decades following him online have traveled to see him in-person for the first time from as far as Japan.

When fans stand and cheer for Nowitzki, they are standing and applauding a player who reached the peak of athletic performance while maintaining the grace and humility of an everyday person. He’s an eminently relatable superstar who failed before he would succeed, and who uses his platform to make a difference in a city that was not even his first home. They are cheering not just for the face of the Mavericks, but for a player who, through years of triumphant victories and disappointing defeats, played with a smile and brought smiles to the faces of those who watched him on the floor and who met him in the community. They are not cheering for a legend on the back half of his career. They are cheering for what he accomplished, and what he will continue to accomplish long after his playing days are over. 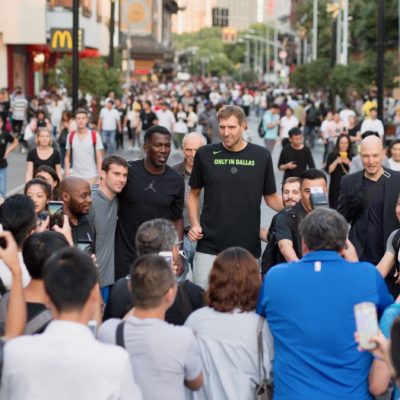 Music to his Ears 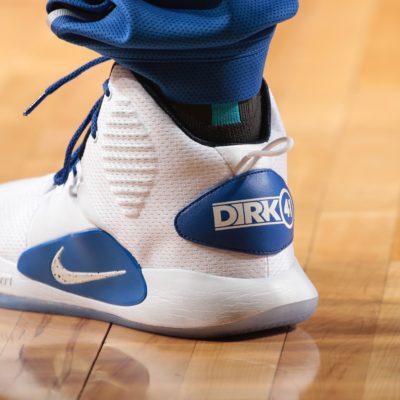